Phoenix News is reporting that China’s State Council has issued a new circular outlining new policies and regulations designed to cool off the property markets-国务院10号文件 (State Council Document Number 10). They will probably make Jim Chanos happy, at least in the short-term, though longer-term these measures may help reign in the growing bubble in time to manage a softer landing. UPDATE6: Chinese investors do not like the new rules: China Developers Fall on Latest Moves to Damp Property Prices.

Of all the rules discussed in the “Document Number 10”, the one that may have the biggest short-term impact is that non-residents of a city can no longer obtain mortgages to buy property in that city unless they can prove that they have paid taxes in that city for at least one year. The new rules also limit mortgages on third or more home purchases. At a minimum this may slow down the Wenzhou buying cliques, though to really stop them the government would need to crack down hard on the underground banking system. The government should also figure out how to stop Hong Kong banks like HSBC and Bank of East Asia from issuing US dollar mortgages at <3% interest to customers they know are using those loans to buy property on the mainland, purchases that may appear as “all cash” to the mainland authorities.

UPDATE2: Similiar restrictions were placed on purchases by foreigners in the Beijing market in late February. It sounds like they will be expanded nationwide. I discussed the Beijing restriction on foreign purchases, as well as a very harsh new rule on foreign-owned commercial space in Beijing in an earlier post-Impact of New Beijing Housing Rules on Foreigners. Since the beginning of 2010 the Beijing Administration of Industry and Commerce (BAIC) no longer accepts registrations of companies, either foreign or domestic, at commercial spaces purchased by foreigners after June 2006.

UPDATE3: A relative who knows a lot of Shanxi coal mine bosses, all big buyers of real estate, suggested several weeks ago that restrictions on purchases by non-residents, not just on foreigners, should be in the cards, as I repeated on Twitter.

“Document Number 10” outlines measures to increase the housing supply and build more affordable housing, all things you would expect from a Socialist government. As I wrote yesterday about Wen Jiabao’s essay reminiscing about Hu Yaobang: “Harkening back to Hu Yaobang may be a signal that more substantive and muscular policies are coming that will lead China to act a bit more like a Socialist country.” Perhaps they are all related.

UPDATE1: Xinhua has released a brief summary of the new rules in English. I will post the full text when it is translated. Here is the summary:

Commercial banks can refuse to issue loans to buyers of their third home in areas suffering from excess property price rise, said the State Council, or the Cabinet, on Saturday.

To curb speculation, banks can also halt loans to those who can’t provide materials to prove they had lived and paid taxes and social insurances for at least one year in cities where they intended to buy houses, according to a statement on the central government’s website.

The statement also urged local governments to take any necessary measures to put restrictions on the number of homes to be bought in a certain period of time.

Tax policies should be employed to adjust consumption for housing and earnings on property development, according to the statement.

These policies look very smart, and will likely be effective if they are actually implemented. We may still see a property tax at some point, but I am skeptical such a tax will get past the “research” stage anytime soon. There are too many complications around a property tax, including but not limited to the complexities of the technical implementation; asset disclosures that would be required of all the officials who own property that they could never afford on their salaries; objections from powerful interest groups, and resistance from already burdened middle class homeowners.

I have reprinted below a comment I made last December (before I started this blog) to China Goes Wrong Way on Property Taxes. I questioned the efficacy of a possible property tax and suggested other policies to rein in housing. At least two–limits on foreign buying and SOE participation in the real estate market–have been enacted. The full comment:

1. Owners in China already pay property management fees on those vacant properties, at an annual rate of somewhere between 0.1 and 0.5% what they paid. So they are already bearing annual, cash carrying costs for these vacant properties, and an additional 0.5-1.0% in property tax (the numbers I have heard bandied about but I am not sure anyone knows what the likely number really might be) is unlikely to be meaningful to many of the owners;

2. My assumption is that most of the places that are vacant, with no real attempts to rent them, were either purchased in cash and/or the owner is rich enough that they can handle an incremental 25-75k rmb a year in property taxes, on top of the property management fees they are already paying. It would be helpful if you have any data on the composition of ownership, from net worth to mortgage size to percentage that paid in cash; I have not been able to find that data, but based on my personal experiences in Beijing a property tax for most of the owners of these vacant properties would be a nuisance but not much more;

3. The Chinese I know in Beijing and Shanghai with multiple properties bought them either because they had too much cash and no good place to invest it other than real estate, they assume that even if prices are high now in 10 years in world class cities like Beijing and Shanghai they will be even higher, and/or they are buying as an inflation hedge. I think Chinese people culturally have been conditioned to see real estate as an inflation hedge and a savings vehicle, much more so than in the US (our houses were seen as consumption vehicles for the most part);

4. I think that reintroducing limits on buying by foreigners, especially Hong Kongers, could have a meaningful impact on at least the high end of the market. There has been a Hong Kong buying frenzy in Beijing (and I assume Shanghai) fueled by cheap and easy money in Hong Kong (thanks to the peg and the Fed) and real concern about a dollar collapse and inflation, coupled with the fact that Beijing and Shanghai still look pretty cheap compared to Hong Kong. One anecdote, the Beijing Four Seasons residences (soon to open next to the Lufthansa Center) were only sold in Hong Kong. Day 1 they were priced at 70,000 RMB/sq m; demand was so high that in a matter of days the price was raised to 100k, and they are now all sold out. They were never marketed in China, other than to insiders (friends of the developer could buy for 35,000 RMB sq m in May). Curbing this kind of speculation from overseas, much of trying to play a long RMB/ short USD (you can get very cheap USD mortgages in HK and through Bank of East Asia in Beijing) as well as hedging against inflation and playing the long term geopolitical and urbanization trends, would probably much more popular than a property tax, and for good reason. So long as the currency is not convertible, there is an argument to be made that if you are not a PRC citizen and you want to buy a property in the PRC you should have to live in it;

5. Whatever effect a property tax might have on speculation, I think it would be at the margins at best and would not address the core, structural factors that have been driving price appreciation. In this interview posted today on 21st Century Herald with economist Lang Xianping he points out that the real causes of the growing real estate are extremely loose monetary policy/excess liquidity, overcapacity and structural problems that lead to misallocation of capital with massive corporate/SOE participation in real estate and equity markets using borrowed money [how many of these vacant apartments may actually be owned by companies? How many SOEs are bidding on urban with basically free government money?]

6. I have had several Beijing friends who have started buying the US. They don’t see the property tax as a reason not to buy, they just see it as one of the costs associated with the transaction and factor for it accordingly.

And of course, the US has had property taxes for years and they did nothing to prevent one of the greatest housing bubbles in history.

UPDATE5: Chinese Twitterer @orangeking forwarded me a graphic from one of the main Chinese real estate websites showing that the State Council and Premier Wen Jiabao have made numerous pronouncements since 2004 about cooling off the real estate market, all to no effect. Chinese people are conditioned to be very cynical, and they are usually proven correct. We will find out if this time is different. 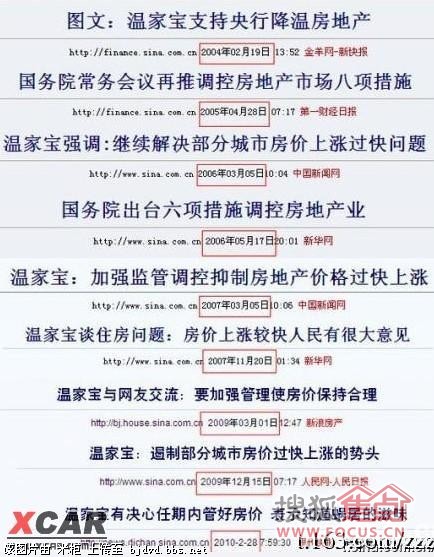 Regardless, expect Monday to be a brutal day for real estate-related stocks in the Chinese and Hong Kong Stock markets.

Please tell me what you think in the comments.

If you use RSS you can subscribe to this blog’s feed here, and if you use Twitter you can follow my more frequent updates @niubi. You can also follow my blogging on digital media and the Internet in China at DigiCha.