Happy Saturday…President Trump has started his weekend in Asia, where he will be for the next 11 days visiting Japan, South Korea, China, Vietnam and the Philippines. The expectations seem so low that perhaps anything short of triggering a trade or hot war will be considered a success?

I have a couple of big announcements to make.

First, this free weekly newsletter is moving to a much bigger platform. Starting November 10 the weekly version will go out in partnership with Axios, as the “Axios China” Newsletter by Bill Bishop of Sinocism. Look for a welcome e-mail next week from Axios. Going forward the format of the weekly newsletter will follow the pithy, concise Axios style.

Second, the rates for the daily version of The Sinocism China Newsletter are increasing on November 18 from $11/month or $118/year to $15/month or $168/year. Anyone who has signed up under the loyal subscriber charter rate before November 18 will have the lower monthly or annual rates locked in at least through 2018, including annual renewals. You can subscribe here.

Reform Scorecard, North Korea, Propaganda Teams, Party Everywhere But Not A Fun One, Zuckerberg And Xi–Sinocism 11.02.17

To read the daily version, and, as the Sinocism tagline suggests, “get smarter about China” you can subscribe here.

1. President Trump Goes to Asia, “Free and Open Indo-Pacific” Is The New “Pivot” To Counter China’s RiseThe Pivot Rebranded:  The New York Times has a good overview of the strategic backdrop to Trump’s Asian tour. We will hear a lot about the concept of a “free and open Indo-Pacific”–Trump Heads to Asia With an Ambitious Agenda but Little to Offer:

Other Things to Watch:

So far I am not hearing to expect any substantive breakthroughs with China on either trade or North Korea. China and the US will sign a lot of deals during the visit, but deals are easy for the Chinese and, once you wade through the PR spin, many of the signed “agreements” may actually be non-binding MOUs. I hope I am wrong but it sounds like the US President will shy away from any specific, hard asks around the metastasizing structural issues in the US-China economic relationship.

But Xi Jinping will ensure Trump is well feted. The Forbidden City will close November 8 for Trump’s private tour and Cui Tiankai, the soon-to-retire Chinese Ambassador to the US, told the media that the US President “will receive a “State visit-plus” featuring a military honor guard, official talks, formal banquet and “special arrangements”.

There has been some hope that on this trip the US might win freedom for Liu Xia, Liu Xiaobo’s widow. In the meantime Prominent international writers have asked China to release her.

Party rag The Global Times has praised Chief of Staff Kelly’s recent comment to Fox News that China has “”a system of government that has apparently worked for the Chinese people.”

The PRC-South Korea “rapprochement” just before the Trump visit is noteworthy. This newsletter has suggested a few times over the last several weeks that Xi might find some sort of face-saving solution over THAAD to allow Beijing to back away from its hysterical reaction and rebuild ties with South Korea, with a goal towards driving a wedge between Seoul and Washington over North Korea. The story I heard was that the initial briefing to Xi about THAAD dramatically overstated its capabilities, leading Xi to overreact and then the entire system to overreact with him. Just days after the 19th Party Congress Xi seems to have gotten past the THAAD issue and made a smart correction of a mistaken policy that may reduce Trump’s multilateral DPRK options and leverage ahead of his Asia visit.

I did a fun Sinica podcast on the 19th Party Congress:

Zhao Kezhi is the new head of the Ministry of Public Security and, as Sinocism predicted in the 10.25 newsletter, Xi loyalists Huang Kunming and Ding Xuexiang have been named Minister of Propaganda and head of the Central Committee General Office, respectively. The new head of the important Central Policy Research Office remains a mystery, as does the role that Hu Chunhua will take on.

As expected as they always do these campaigns after Party Congresses. The intensity, the focus on one individual–Xi–and the inclusion of Chen Min’er on the “central publicity team” look a bit different than years past. Party members will spend a lot of time in the coming weeks on this.

Ian Bremmer of The Eurasia Group goes full pundit in his cover story China’s Economy Is Poised to Win the Future: 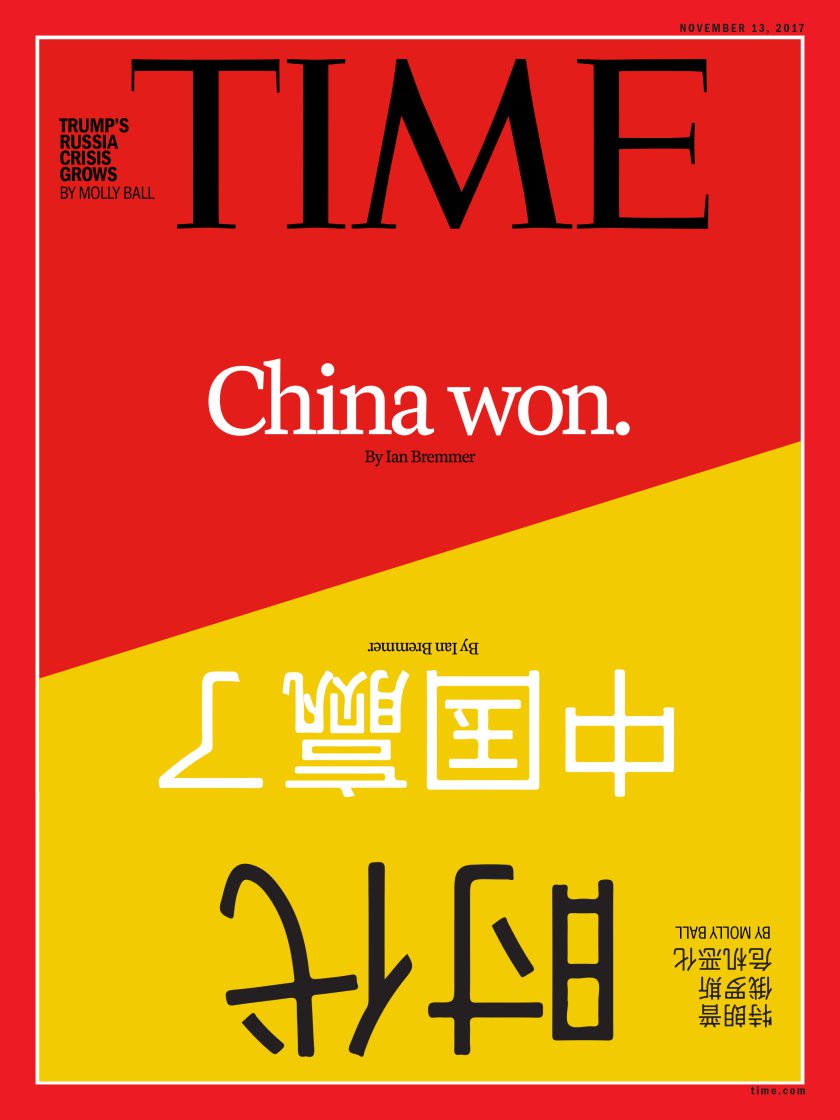 6. Commander In Chief Xi Reiterates The Need To Be Ready To Fight And Win Wars

More: Xi also held a video chat with troops at China’s base in Djibouti, on the northwestern edge of the Indian Ocean–Promote peace, China’s Xi tells soldiers at first overseas base – Reuters 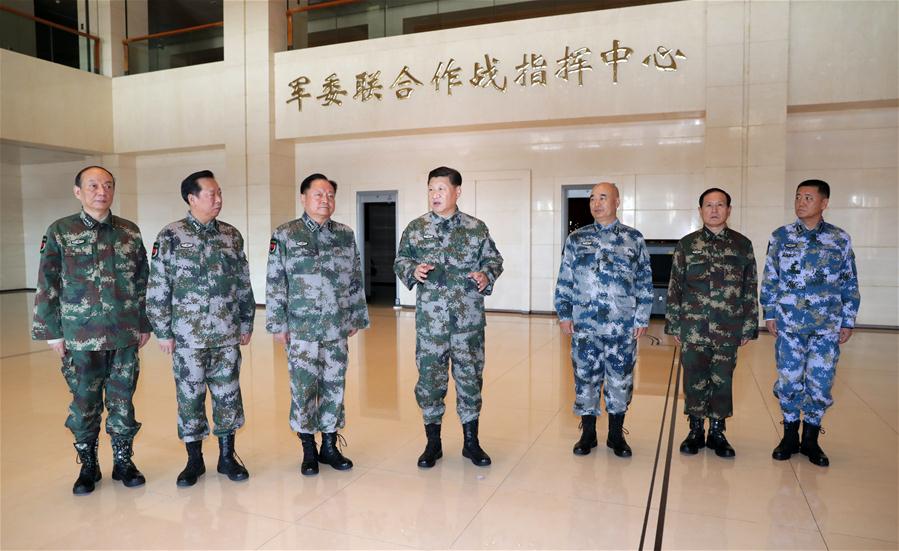 7. The AI Race with China Is A New “Sputnik Moment”?

Finding Talent: A former Facebook engineer, now venture capitalist in China explains that China can take a shortcut to catch up in AI by poaching people from the US-A Cross Border Perspective on Frontier Tech Investing – With Linear Venture Founding Partner Harry Wang:

And that approach appears to be part of a more coordinated strategy:

Or: Is it better to have the money and political will to spend on the research and then figure out how to work with and around the Party? Physicist Yangyang Cheng examines a proposed Chinese supercollider that, at 34 miles in circumference, would be double the size of the Large Hadron Collider (LHC).

The Future of Particle Physics Will Live and Die in China – Foreign Policy:

9. Zhou Xiaochuan Stresses The Roles of The Market And The Party In Financial Reforms

The context: The soon-to-retire central bank chief made the comments in a chapter in the recent released 19th Party Congress Study Guide 周小川：积极有序发展股权融资，稳步提高直接融资比重. They do not seem to differ from things said previously. The long mooted financial reforms now await political will and the perhaps the December Central Economic Work Conference. A decisive role for the market and supply side structural economic reforms were just written into the Party Constitution.

10. Guo Wengui And The Twitter War Between Overseas Chinese

Comment: It has been remarkable to watch the acrimony between critics and defenders of Guo Wengui. Some on each side are clearly not acting with pure motives though not every supporter or critic is simply a paid shill or spy for the other side. But accusing exiled lawyer Teng Biao of being a CCP spy calls into question all of Guo’s other allegations. Guo should actually talk less, though that is tough for someone who so loves the spotlight.

Serious Question: Did any PRC official bring up Guo Wengui with Mark Zuckerburg during his recent homage to Xi Jinping?

11. China May Have Banned Bitcoin Exchanges But The Government Loves The Blockchain

Go Deeper: Caixin has a special report on Bitcoin, the Blockchain and China-Caixin Global – No Bit Player:

Financial Times Asia editor Jamil Anderlini has an excellent story about How the panda became China’s diplomatic weapon of choice:

Not Actually Cuddly: As part of my 1994 summer scramble to pay for my second year of graduate school I ended working as a translator on the US-China feature film coproduction “The Amazing Panda Adventure“. Most of it was shot in Jiazhaigou, Sichuan, an amazing place, especially 23 years ago when there were almost no tourists. I got to pet one of the pandas and it felt like rubbing a steel wool pad as their fur is so coarse. Since then I have always chuckled about the accusation someone is a “Panda Hugger”. The reality is if you hug a panda you are going to get scratched…

Remember, the rates for the daily version of The Sinocism China Newsletter are increasing on November 18 from $11/month or $118/year to $15/month or $168/year. Anyone who has signed up under the loyal subscriber charter rate before November 18 will have the lower monthly or annual rates locked in at least through 2018, including annual renewals. You can subscribe here.
Follow me on Twitter @niubi for updates between newsletters
Send comments/tips/complaints to [email protected]